VANCOUVER, BC / ACCESSWIRE / August 24, 2022 / Guanajuato Silver Company Ltd. (the " Company " or " GSilver ") (TSXV:GSVR)(OTCQX:GSVRF) is pleased to announce financial and operating results for the three months ended June 30, 2022. All dollar amounts are expressed in US dollars ($) . Production results are from the Company's wholly owned El Cubo Mine Complex (" El Cubo ") and El Pinguico (" El Pinguico ") project in Guanajuato, Mexico.

"Month over month improvements in precious metals production, recoveries, and tonnes milled during Q2 were the hallmarks of a positive trend that we see continuing through the remainder of the year as we complete the ramp-up phase at El Cubo," said James Anderson, Chairman and CEO of Guanajuato Silver. "We remain on-track to accomplish all of our original objectives at El Cubo as we now look to our Mexican operations teams to mirror the same success at our newly acquired mining assets of San Ignacio, Valenciana, and Topia, where production activities have already begun; the details of which will be discussed in a subsequent news release." 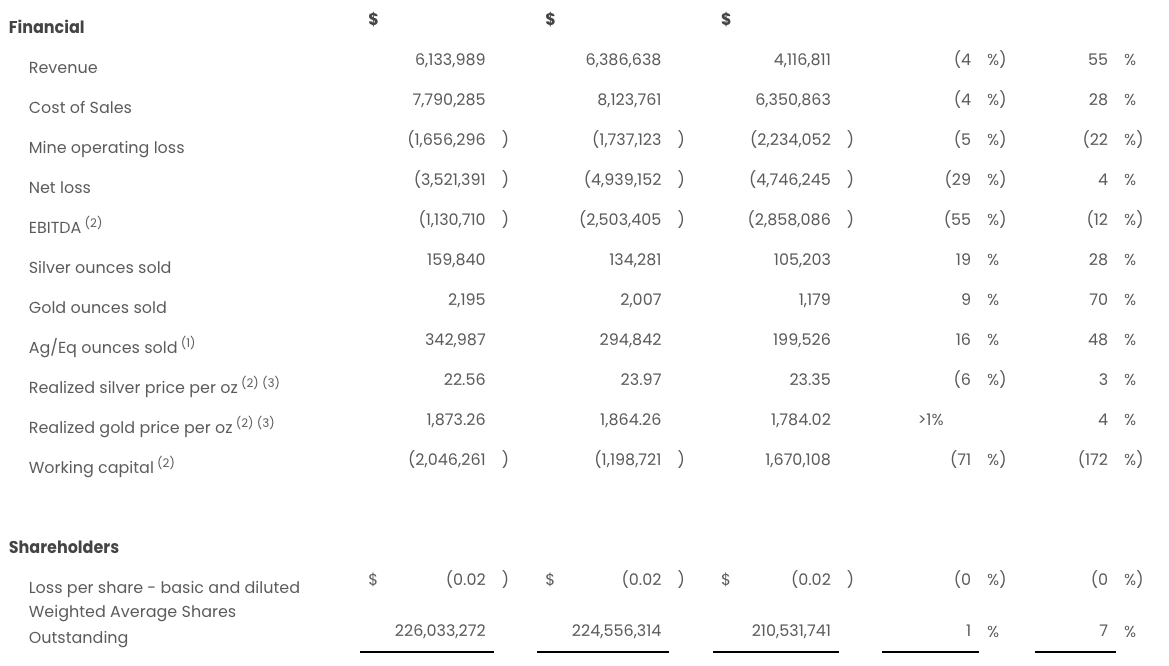 The complete interim financial statements and management's discussion & analysis for the three months ended June 30, 2022, can be viewed on SEDAR at www.sedar.com and at the Company`s website at gsilver.com.

Hernan Dorado Smith, a director and officer of GSilver and a "qualified person" as defined by National Instrument 43-101, Standards of Disclosure for Mineral Projects, has approved the scientific and technical information contained in this news release.

GSilver is a precious metals producer engaged in reactivating past producing silver and gold mines near the city of Guanajuato, Mexico, which has an established 480-year mining history. With five mines and three processing facilities, the Company is one of the fastest growing silver producers in Mexico.

JJ Jennex, Gerente de Comunicaciones, T: 604 723 1433
E: This email address is being protected from spambots. You need JavaScript enabled to view it.
Gsilver.com

Such forward-looking statements and information reflect management's current beliefs and are based on information currently available to and assumptions made by the Company; which assumptions, while considered reasonable by the Company, are inherently subject to significant operational, business, economic and regulatory uncertainties and contingencies. These assumptions include: our mineral resource estimates at El Cubo and El Pinguico and estimates of mineralized material at San Ignacio, Valenciana and Topia and the assumptions upon which they are based, including geotechnical and metallurgical characteristics of rock conforming to sampled results and metallurgical performance; available tonnage of mineralized material to be mined and processed; resource grades and recoveries; assumptions and discount rates being appropriately applied to production estimates; the ability of the Company to successfully integrate production from San Ignacio and Valenciana into the Company's existing mining and milling operations at El Cubo and the availability of excess processing and tailings capacity at El Cubo to accommodate same; the Company's ability to secure additional sources of mineralized material for processing, prices for silver, gold and other metals remaining as estimated; currency exchange rates remaining as estimated; availability of funds for the Company's projects and to satisfy current liabilities and obligations including debt repayments; capital, decommissioning and reclamation estimates; prices for energy inputs, labour, materials, supplies and services (including transportation) and inflation rates remaining as estimated; no labour-related disruptions; no unplanned delays or interruptions in scheduled construction and production; all necessary permits, licenses and regulatory approvals are received in a timely manner; and the ability to comply with environmental, health and safety laws. The foregoing list of assumptions is not exhaustive.

Readers are cautioned that such forward-looking statements and information are neither promises nor guarantees, and are subject to risks and uncertainties that may cause future results, level of activity, production levels, performance or achievements of GSilver to differ materially from those expected including, but not limited to, market conditions, availability of financing, currency rate fluctuations, rising inflation and interest rates, geopolitical conflicts including wars, actual results of exploration, development and production activities, actual resource grades and recoveries of silver, gold and other metals, availability of third party mineralized material for processing, unanticipated geological or structural formations and characteristics, environmental risks, future prices of gold, silver and other metals, operating risks, accidents, labor issues, equipment or personnel delays, delays in obtaining governmental or regulatory approvals and permits, inadequate insurance, and other risks in the mining industry. There are no assurances that GSilver will be able to continue to increase production, tonnage milled and recoveries rates, improve grades and reduce costs at El Cubo and/or Topia to process mineralized materials to produce silver, gold and other concentrates in the amounts, grades, recoveries, costs and timetable anticipated. In addition, GSilver's decision to process mineralized material from El Cubo, El Pinguico and its newly acquired San Ignacio, Valenciana and Topia mines is not based on a feasibility study of mineral reserves demonstrating economic and technical viability and therefore is subject to increased uncertainty and risk of failure, both economically and technically. Mineral resources and mineralized material that are not Mineral Reserves do not have demonstrated economic viability, are considered too speculative geologically to have the economic considerations applied to them, and may be materially affected by environmental, permitting, legal, title, socio-political, marketing, and other relevant issues. There are no assurances that the Company's projected production of silver, gold and other metals will be realized. In addition, there are no assurances that the Company will meet its production forecasts or generate the anticipated cash flows from operations to satisfy its scheduled debt payments or other liabilities when due or meet financial covenants to which the Company is subject or to fund its exploration programs and corporate initiatives as planned. There is also uncertainty about the continued spread and severity of COVID-19, the ongoing war in Ukraine and rising inflation and interest rates and the impact they will have on the Company's operations, supply chains, ability to access mining projects or procure equipment, contractors and other personnel on a timely basis or at all and economic activity in general. Accordingly, readers should not place undue reliance on forward-looking statements or information. All forward-looking statements and information made in this news release are qualified by these cautionary statements and those in our continuous disclosure filings available on SEDAR at www.sedar.com including the Company's interim financial statements and accompanying MD&A for the three month period ended June 30, 2022. These forward-looking statements and information are made as of the date hereof and the Company does not assume any obligation to update or revise them to reflect new events or circumstances save as required by law.