VANCOUVER, BC / ACCESSWIRE / May 5, 2022 / Guanajuato Silver Company Ltd. (the "Company" or "GSilver") (TSXV:GSVR)(OTCQX:GSVRF) is pleased to report drill results from its ongoing exploration programs at the Company's wholly owned El Cubo Mine Complex and El Pinguico project in Guanajuato, Mexico.

Highlights from Recent Drilling at the Company's Guanajuato properties:

"These results serve to build confidence in our understanding of geological controls of high-grade mineralisation within the various veins and different zones of our Guanajuato mine holdings. Further, drilling at the El Cubo mine continues to identify mineralisation that the Company can quickly build into its near-term mining plans," commented James Anderson, Chairman and CEO of Guanajuato Silver.

GSilver continues infill and expansion drilling at the El Cubo Mine targeting the Villalpando, Asuncion, Tuberos and ‘680' veins at the Villalpando and Santa Cecilia areas; in parallel, GSilver is continuing exploration at the El Pinguico project targeting the Arroyo and Pinguico veins. From late January to end of March 2022, a total of 3,130 meters in 14 holes were drilled from underground at the Guanajuato properties.

The drill results announced today include the last two holes drilled at El Pinguico in 2021, and six of the 14 diamond drillholes drilled so far this year. The Company is reporting results for a total of eight drill holes from the three areas.

Drilling at the Capulin area of El Cubo, targeting the Villalpando and Asuncion vein structures, has been very successful. Overlooked by previous operators, this area boasts ample development work with easy access to newly defined mineralised material. The Asuncion vein occasionally exhibits bonanza grades as highlighted by VPO22-002, which returned over 95 troy ounces of silver-equivalent over an estimated true width of 0.35 metres. At Capulin, drill holes VPO22-04 and VPO22-05 have been drilled and are out for assay. Drilling remains ongoing in this area. 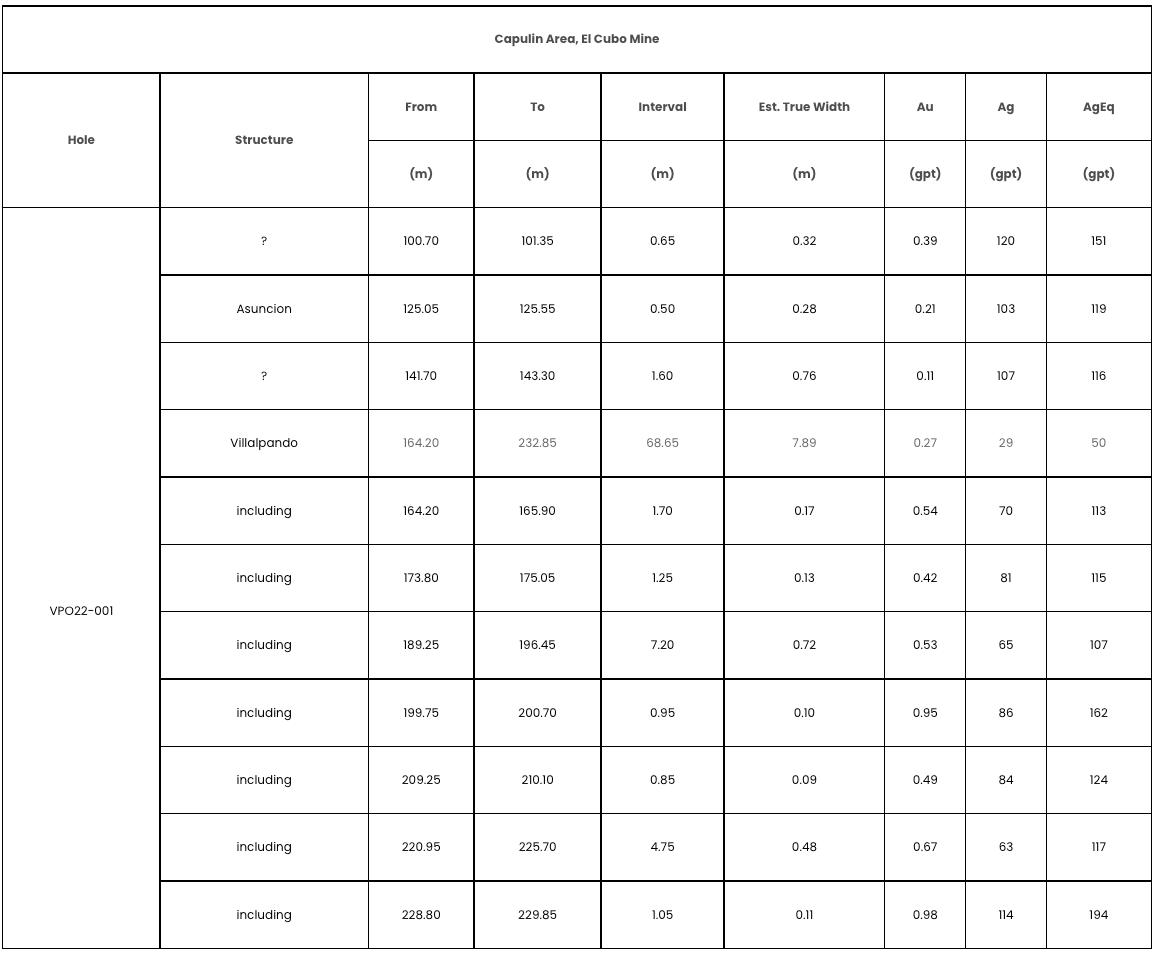 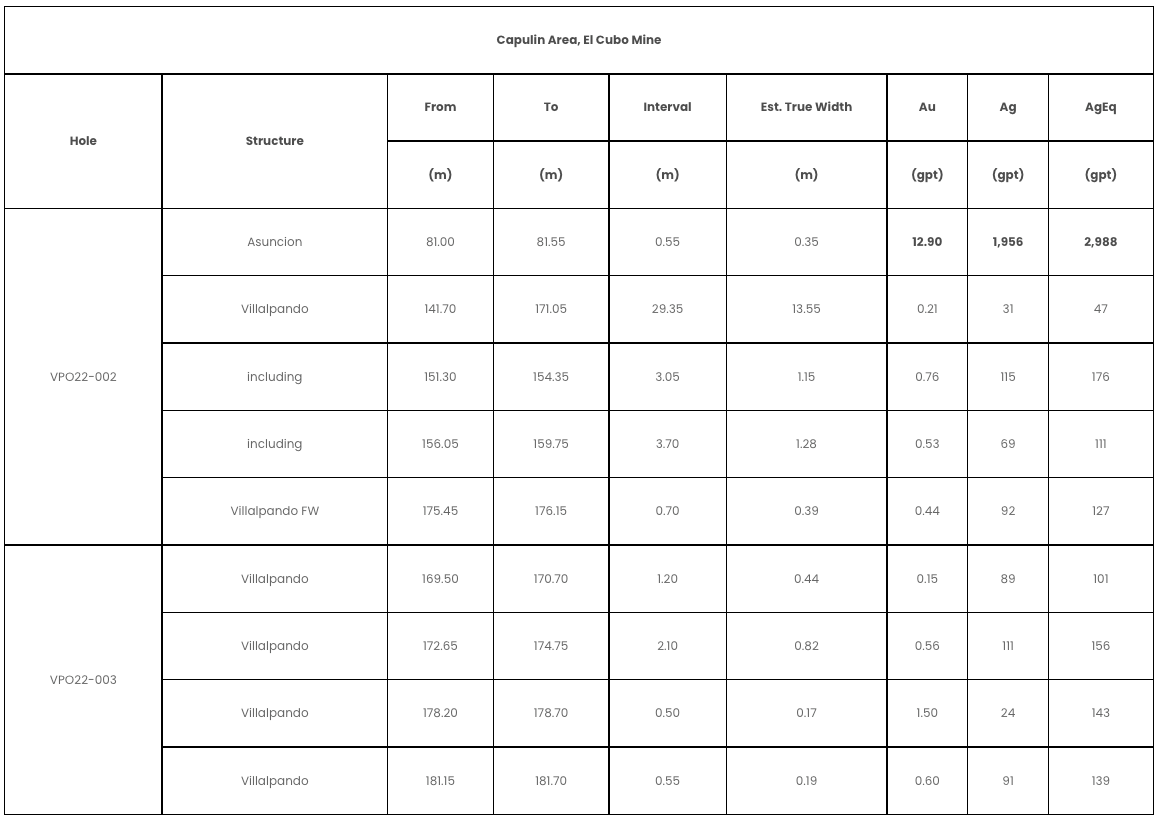 Drilling in the Santa Cecilia area of El Cubo targets numerous vein structures; these include ‘680', Tuberos, Poniente, and the northern extension of Villalpando. In this area, productive veins are often perpendicular (transverse) to the regional NW structure and frequently carry proportionally higher gold content.

As mine production in the Santa Cecilia area continues to take on a more important role within GSilver's El Cubo mining strategy, and in view of the area's important grade potential, the decision has been made to join the southern Villalpando area with the northern Santa Cecilia area at depth. With only approximately 150m of development tunnelling to complete before this connection is made, management estimates that the work necessary for this task will take only approximately 6 to 8 weeks. Upon completion, haulage trucks, which currently need to travel on gravel roads for 6.7km from Santa Cecilia to our processing plant, will now need only to travel 2.5km within the mine; thereby reducing fuel costs, tire wear, and road maintenance costs significantly and immediately.

At Santa Cecilia, drill holes SC22-03 to SC22-08 have been drilled and are out for assay. Drilling at Santa Cecilia, an area that was largely discounted by previous operators, remains ongoing.

Commenting on these results, James Anderson added, "The gold-bearing transverse veins at Santa Cecilia are demonstrative of the numerous opportunities that exist at El Cubo where we can take advantage of rich mineralization that was largely overlooked in recent years. Remarkably, we are already producing precious metals concentrate from backfill and stacked material that was previously left behind at Santa Cecilia. Evidence of additional similar transverse veins are present throughout El Cubo, and we expect that these systems will form a major component of our mining operations into the future."

Drill results from the El Pinguico project included two drill holes drilled from the San Jose #2 crosscut in 2021. P21-22 encountered the Pinguico system and returned 0.60m estimated true width (ETW) at 285 gpt AgEq. Importantly, both holes cut good widths of very good grade in the Arroyo vein; this vein was encountered previously but until now had only returned moderate results. These results will be thoroughly studied and interpreted by GSilver geological staff prior to additional targeting of this area.

2022 drilling at El Pinguico was targeted from a drill site located within the old mine workings at Adit Level 1 for the first time. Good widths of moderate grade were encountered in P22-01. P22-02 encountered no significant results; P22-03 is out for assay, while drilling of P22-04 is ongoing.

Note: All silver equivalent (AgEq) values are calculated based on a long-term gold to silver price ratio of 80:1 as used by mineral industry advisors, Behre Dolbear and Company (USA), Inc., in the Company's NI 43-101 PEA report with the effective date of January 31, 2021; a copy of which is available for review on SEDAR. Abbreviations used in this news release include: gpt: grams per tonne; Au: gold; Ag: silver; ETW: estimated true width; m: metre, AgEq: silver equivalent, Est.: estimated, FW: Footwall.

Hernan Dorado Smith, a director and officer of GSilver and a "qualified person" as defined by National Instrument 43-101, Standards of Disclosure for Mineral Projects, has approved the scientific and technical information contained in this news release.

GSilver mines and processes silver and gold concentrate from its El Cubo mine and mill. The Company continues to delineate for additional silver and gold resources through underground drilling at El Cubo and its nearby El Pinguico project. Both projects are located within 11km of the city of Guanajuato, Mexico, which has an established 480-year mining history.

Email: This email address is being protected from spambots. You need JavaScript enabled to view it.

Continue to watch our progress at: www.GSilver.com

This news release contains certain forward-looking information and statements, which relate to future events or future performance including, but not limited to, the Company's proposed development and mining plans at El Cubo and El Pinguico, expected areas and plans for future mining operations and the timing thereof, the Company's proposed drilling and exploration programs at El Cubo and El Pinguico in 2022 including the total number of meters to be drilled, the locations thereof and the anticipated results therefrom; the Company's expectations for grade and width of certain veins within the El Cubo mine and El Pinguico project including prospective high grade vein locations and opportunities for resource expansion; and the Company's ability to meet its ramp-up expectations and position its mining operations to continue the current trajectory of delivering rising tonnage, grade, recoveries, and revenue from precious metals concentrate sales. Such forward-looking statements and information reflect management's current beliefs and are based on information currently available to and assumptions made by the Company; which assumptions, while considered reasonable by the Company, are inherently subject to significant operational, business, economic and regulatory uncertainties and contingencies. These assumptions include: our mineral resource estimates at El Cubo and El Pinguico and the assumptions upon which they are based, including geotechnical and metallurgical characteristics of rock conforming to sampled results and metallurgical performance; tonnage of mineralized material to be mined and processed; resource grades and recoveries; assumptions and discount rates being appropriately applied to production estimates; success of the Company's combined El Cubo / El Pinguico mining operation and development and exploration programs thereon; prices for silver and gold remaining as estimated; currency exchange rates remaining as estimated; availability of funds for the Company's projects; capital, decommissioning and reclamation estimates; prices for energy inputs, labour, materials, supplies and services (including transportation) remaining as estimated; no labour-related disruptions; no unplanned delays or interruptions in scheduled construction and production; all necessary permits, licenses and regulatory approvals are received in a timely manner; and the ability to comply with environmental, health and safety laws. The foregoing list of assumptions is not exhaustive. Readers are cautioned that such forward-looking statements and information are neither promises nor guarantees, and are subject to risks and uncertainties that may cause future results to differ materially from those expected including, but not limited to, market conditions, inflation, supply chain disruptions, availability of financing, currency rate fluctuations, actual results of exploration, development and production activities, actual resource grades and recoveries of silver and gold, unanticipated geological or structural formations and characteristics, environmental risks, future prices of silver, gold and other metals, operating risks, accidents, labour issues, equipment or personnel delays, delays in obtaining governmental or regulatory approvals and permits, inadequate insurance, and other risks in the mining industry. There are no assurances that GSilver will be able to continue to ramp-up its operations at the El Cubo mill to deliver the rising tonnage, grades, recoveries, and revenue from precious metals concentrate sales at the costs and within the timetable anticipated. In addition, GSilver's decision to process mineralized material from its estimated resources at El Cubo and above and underground stockpiles at El Pinguico through the El Cubo mill is not based on a feasibility study of mineral reserves demonstrating economic and technical viability and therefore is subject to increased uncertainty and risk of failure, both economically and technically. Mineral Resources that are not Mineral Reserves do not have demonstrated economic viability, are considered too speculative geologically to have the economic considerations applied to them, and may be materially affected by environmental, permitting, legal, title, socio-political, marketing, and other relevant issues. There are no assurances that the results of the Company's recently announced preliminary economic assessment and projected production of silver and gold concentrate will be realized. There is also uncertainty about the continued spread of COVID-19 and the current war in Ukraine and the impact they will have on the Company's operations, supply chains, ability to access El Cubo and/or El Pinguico or procure equipment, supplies, contractors and other personnel on a timely basis or at all and economic activity in general. All the forward-looking statements and information made in this news release are qualified by these cautionary statements and those in our continuous disclosure filings available on SEDAR at www.sedar.com. The forward-looking statements and information are made as of the date hereof and the Company does not assume any obligation to update or revise them to reflect new events or circumstances save as required by law.